When the gates are opened to the private school’s playing fields and tennis courts on the Fore River, the public is welcome to walk along the school’s small but pretty trail system. Dogs are allowed, too, as long as they don’t go on the fields. I tried to find out information about when the gates are opened, but was unsuccessful! From the gate to the view of the river and Thompson’s Point, it’s just over .5 miles.

Additionally, the trail system here is very close to the Fore River Trail.

Directions: The address is 283 Osgood Street in Portland. Turn onto Hobart Street from Congress Street. In .3 miles, turn right onto Osgood Street and drive to the gates.

Both kids and grandparents should appreciate this in-town walk that includes a paved walking trail along the Androscoggin River and by the thundering hydroelectric dam. The path is wheelchair accessible and good for biking. And the pedestrian swinging bridge, which bounces slightly as you walk across it, is kind of thrilling! The expanse of river it crosses is wide, giving you lots of chances to check out the river views in either direction.

There are at least two cute pocket beaches along the trail—but the town forbids swimming in the river. There’s also a pretty overlook on a rocky ledge, with a bench for resting and “enjoying the passage of time.”

The paved section of the walking path in Topsham doesn’t quite reach the antique green Frank J. Wood Bridge that crosses the river into Brunswick. But the last 500 feet or so of the route are on a sidewalk, and then across a parking lot to the Wood Bridge. It’s easy to complete the satisfying 1.25-mile loop from bridge to bridge, and through the two towns. The loop is universally accessible, on paved trail or sidewalks, the whole way.

The paved section of trail on the Topsham side is .6 miles, and includes what the town calls the short Bridge to Bridge Trail.

Directions: There are several places to park: You can leave a car at the pedestrian swinging bridge on the Brunswick side, off Route 1 and across from Cushing Street. There are also two parking areas on the Topsham side, one at the other end of the swinging bridge, and the other at the start/end of the path, closer to the green Frank J Wood Bridge. All marked with green icons on my map. Go here to see all the parking areas.

These are two different urban (and quasi-urban) trails that meet up for a 3.3-mile walk one way. (I say quasi-urban because the Kenduskeag Stream Trail quickly takes you away from the downtown to more pastoral surroundings.)

The Bangor Waterfront Trail is just a hair under one mile, and is paved and wheelchair accessible the whole way. Much of the 2.4-mile Kenduskeag Stream Trail is also wheelchair accessible, but it is dirt, and there is one steep, short hill and one staircase (closer to the downtown section). If you start at its northern end, you’ll have a nice long stretch that is wheel-friendly.

The city has a wonderful map of these two trails, and all of Bangor-area trails.

Directions: There are several places to start your walk along this path. And there are several places to park. To start at the northern end, take Valley Avenue north past the interstate. The parking area and trailhead will be on your left in about .35 miles after you drive under the highway. You can also start the walk closer to downtown, at the end of Dutton Street, where there is a small area for parking. And there’s lots more parking at the other end of the Bangor Waterfront trail, near Sea Dog Brewing.

The two riverside walks of Bangor and Brewer lie opposite one another, across the Penobscot River. If you’re ambitious, you can combine them for a longish river walk! Brewer’s walk is about .6 mile, from Hardy Street to Penobscot Street. (Although, I may have turned in early and the true end is Veterans Park? Local sources say the path is 1 mile, but I’m not sure how that length is being calculated.) The path is paved and quite pretty, especially at sunset.

Directions: You can park off of Penobscot Street, at one end of the trail. I’m not sure if it’s kosher to park at the Mason Brewery, on Hardy Street, where the other end of the trail starts. But it’s kosher if you stop in for an après-walk pint or snack!

This is a delightful off-road urban trail, with bridges and river views, that begins (or ends) at Thompson’s Point. For those who don’t know it, Thompson’s Point is a development with restaurants, food trucks, breweries, museum(s), an indoor market, and an outdoor concert venue on a parklike point with benches—including one that swings.

The trail meanders along a little river nook and then parallels the train tracks before taking walkers across Hobart Street to a small riverside meadow. You can make a little loop on the roads before joining up with the trail again to return to Thompson’s Point. It’s definitely bike-able and I think sturdy wheelchairs would be okay along most of the trail.

Additionally, the trail will take you close to the pretty Waynflete School trails, which are open to the public when the gates are open.

Note: It looks like an older version of the trail once continued across Congress Street before linking up with the Fore River Sanctuary trail system, but I think it may have been discontinued?

Directions: The best way to reach the trailhead on Thompson’s Point is to take Thompson’s Point Road past the bus/train station. You can park on the side of the road before the concert venue. You should see a Portland Trails sign and map here.

This is a wonderful extension of sorts to the fabulous Kennebec Rail Trail, which is across the river. Except in this case, the trail is not paved (but still wheelchair accessible) and passes by interesting historical sites. It’s also slightly more pastoral than the trail on the other side.

The one-way trail begins (or ends) at Old Fort Western, the oldest surviving wooden fort in the U.S. It was built by the British in 1754 and served as a storehouse that could hold goods destined for Fort Halifax, 17 miles north. Benedict Arnold used the fort as a staging point in 1775 during the American Revolution. Now it’s a living history museum, with people in costumes!

The other interesting part of the trail is at the other end, closer to the trail head across Independence Drive. After descending down a steep path (which is not wheelchair accessible), you’ll come to the Greenway trail and walk by the former Kennebec Arsenal, an imposing series of stone buildings with lawns sloping down to a riverside patio. The arsenal was built between 1828 and 1838. In the early 20th century, it was converted into a hospital for the mentally ill before the hospital closed in 2004.

The main portion of the trail runs between Independence Drive to the Old Fort Western. There is additional track running south through the AMHI woods that ends at a sand pit-like area.

Directions: The best place to park is at the Old Fort Western, which can be accessed from Cony Street, right before (or after) the bridge.

This is a short, wide trail (once a sewer access road) that is, in season of course, grassy and lined with wildflowers. Or, at least some of it is. It runs from 261 Harrison Avenue, goes past one dam, and ends at another dam — I think the Paper Mill Dam? — on the Cobboseecontee Stream. It is a good place to see cormorants, herons, and osprey. There are a few picnic tables set up. More info on the second page of the Kennebec Land Trust map, where this trail is called Cobbossee Stream Conservation Area. Like many areas near an urban area, it is not pristine, and I saw some litter. But it has a certain charm and it seems like a nice place to picnic.

Directions: From downtown Gardiner, take Route 126 west toward the the Route 95 turnpike. About one mile from downtown, you will cross the New Mills Bridge. Take an immediate right onto Harrison Avenue (you’ll see a street sign for Andrews Street — Harrison is to its right). Access to the preserve is marked well with several signs along Harrison Ave. The best place to park is on a little pullout before the park; the city has signed this area as official parking area.

This is a small woods, with a few trails and a small wetland area. According to Portland Trails, this little park and other urban forest like it provide crucial habitat and travel corridors for birds and animals, and absorb and filter storm water. The trails link up adjacent neighborhoods.

Directions: The trail can be accessed from Canco Road, or trailheads at the end of Frye, Rosedale or Torrey Streets.

The Long Creek Trail follows the Long Creek for about half a mile. It is a good trail for the people who live nearby. I parked behind The Opportunity Alliance, close to where I found some steps to the trail. The trail includes a short pier overlooking the creek.

Directions: Turn onto Westbrook Street from the junction of Westbrook Street and Western Avenue in South Portland. Go about 1/2 mile until you see the entrance to Brickhill on the right. Take this right, then follow the road all the way to its end, at a parking lot.

Okay, this isn’t really a proper walk, it’s more a very short and pretty stroll after you’ve had a beer or snack downtown. The city has built a little sidewalk/park, with a footbridge, around this small section of the river. To cross the footbridge, you have to climb some stairs. Just beyond the footbridge, on the Saco side of the walk, if you continue past the bridge, you’ll find some nice benches.

Directions: I recommend parking behind Run of the Mill Public House, which is in one of those huge converted brick mills. If you drive toward the river, you’ll see the pedestrian sidewalk and footbridge, and you can park nearby.

Instead of catching a matinee or going on a shopping spree, go for a walk! Clark’s Pond Trail South Portland Land Trust trails skirts the pond behind the mall. While parts of the walk don’t let you forget you’re in an urban setting (there is some litter, and occasionally signs of homeless people), it is peaceful and fun to be in such a different world so close to a shopping mall. Retracing my steps, I did about 2.4 miles of walking here.

The South Branch Trail nearby is accessible from the Cinemagic parking lot. The loop is roughly 0.6 miles, part of which follows the brook.

There’s a good map of the area here.

Directions: If you are arriving by car, use the western (or second) entrance into the Home Depot lot after you’ve turned off of Gorham Road. You’ll see a kiosk and parking to the right of the building. If you head left, you’ll walk out on a small peninsula with benches. If you go right, you’ll walk about 1.1 miles to the end of the trail on busy Westbrook Street.

This is an urban paved walk, possibly to be taken after a meal at one of the downtown Westbrook restaurants. It is short, a little over a mile in one direction, and if you like to feed ducks, there seem to be quite a lot around! The trail is listed on Portland Trails. It is wheelchair accessible. 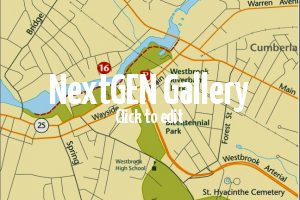